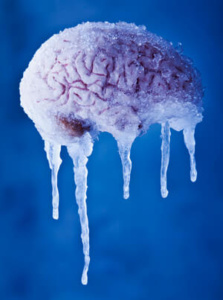 There are two kinds of brain freeze. There’s the one you get from gulping down ice-cream. Painful. There’s another other kind, and much more troublesome. At least if you’re a creative soul with a deadline.

My deadlines are not serious matters. If my newsletter makes it out a little later, like say, the last Monday of the month instead of the Sunday, I will not get the sack or be executed at dawn. However, if you say, you’ll produce a newsletter last Sunday of the month, that’s really what you ought to do. That other kind of brain freeze comes, every time.

Did you ever play that game? Where everyone’s dancing around while the music’s playing and then when the allocated person in charge, turns it off, everyone must freeze in their spot. My brain does this, all by itself—no music needed. Abracadabra, it stiffens like a statue. I’m left with a stone between my shoulders. Not heavy. And not ice-cold either. Pay no attention to this photo. It was the best I could find. Instead think pumice. Light and airy.

One of the worst times this happened to me was many years ago, when we were still involved in church and a bunch of us where to do all kinds of performances. It was all very light hearted, thankfully. I’d written a poem. I was dressed up in something furry, and was to read my said poem which was about the last wolf of Sweden. The theme for the event was loneliness. I’d practiced and practiced—knew it back to front. There had been a rehearsal the night before and all good.

I was nervous. That’s to be expected. The auditorium was filled with quite a few hundred visitors. It was pitch black. You couldn’t see them but you sensed the sea of people. I stepped out and the spotlight landed on me. Brain freeze.

There was a pause, of course, everyone waiting for … Well, something.

Finally words came to me. And they were. ‘I can’t remember a single thing of what I’m supposed to say.’ The surrounding assembly broke out in laughter, no doubt, assuming it was part of my performance.

Once the MC understood that I wasn’t joking, he ran over to rescue the situation. If I remember right, he interviewed me about … I don’t know, what it’s like to be a Swedish wolf, I suppose.

I’d love to say that, like in movies, all I needed was to take a breather and all of a sudden the words came tumbling out, and after the poem was read, I received applauds over a job well done, but that would be a lie. The audience never got to hear what I’d written. Because it didn’t come back to me in time. I’m quite sure I only stuttered ‘Yes’ or ’No’ to the questions from the MC. And then the next item was up, a dance, and my brain freeze was over.

But this happens often to me lately. I have all these ideas of what I want to write about. I record them on my phone. When I sit down to write, there’s nothing, nothing. I’m sure this is why my chocolate intake has well surpassed what’s acceptable. I don’t eat ice-cream so it’s chocolate. At least chocolate doesn’t give me brain freeze.