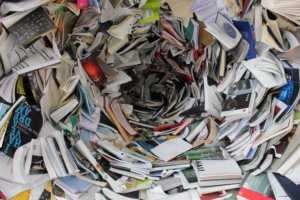 I’ve been calling it brain fog but more accurate would be brain clutter.

If you’ve been to my place, you may have seen my walk-in wardrobe—though I usually rush to close it, if visitors show up. Anyhow, I have one. It’s long with shelving system on both sides, every surface occupied.  A few weeks ago, I put something too heavy on the top shelf and the whole left wall system ripped out and threw itself across to the other side, scattering all my stuff and then some into a mountain that took up the entire space.

That was one of those moments when I didn’t want to be an adult anymore. Or if I had to be an adult, I wanted to be a rich bitch with some kind of handyman who could come fix it for me. Sadly, Wayne was not home to play that roll. I stood for an awfully long time in the doorway, staring at the shambled heap of clothes, upside down boxes, and bits of plaster. I wished I could go read a book, and forget about it.

My brain is like my walk-in wardrobe except for the one single window at the end wall. And also, there are way more than two shelf systems. My wardrobe is pretty bad at the best of timesour sheets, towels, quilts, shoes, every piece of clothing I’ll ever need, kid’s boxes, boxes with old school video tapes that we’ll never watch, and lets not forget Wayne’s one thousand T-shirts. My brain is stocked with all the usual every day mundane, and of course the state of the world. Then there’s a hodgepodge of writing, editing, revising, social networking, learning about self publishing (may still go down that road), querying, marketing, website, essay writing, etc.

But something extra landed in there last week and apparently it was too heavy. It was either Banjo or my second rejection letter. Banjo weighs maybe 6kg. The rejection letter not even a cyber gram though it felt like a ton. It was expected and yet it totally depressed me for the rest of that day.Yet, as much as I hate to admit it, I think it’s the cute puppy with silky soft ears that did it. The shelving system has come undone and all I see is a frigging mess.

Banjo has added a lot of extra work, extra work that takes up so much of my time. There’s the training, the pees and the poos, the cleaning paws and tummy after being out in the rain, the crate training, watching youtube for tips, playing, prepping food…. Worst of all, is the broken sleep. At fifty-nine, I’m not in the mood for getting out of bed at all hours, and out in the bloody rain. In all fairness, at 13 weeks, Banjo doesn’t like it much either. He sleeps in his crate in our bedroom, and when it’s time, he comes to my bed; I carry him down half asleep, outside in just my T-shirt, and drop him on the grass. Of course, we both hover under my enormous umbrella as it pours. As soon as he’s done, we both hurry back in.

Banjo is also a bit nippy which may be due to having spent time with siblings and not so much around humans. He’s going to be a beautiful dog, has all the potential for a well-behaved boy. But there’s work to do and I’d forgotten what it was like to have a baby. I was the one desperate for a pup, and most of the work land on me. I’ve not written a single word on Jasper since we picked him up, last Wednesday. I’ve not posted on Instagram, not created a reel. Right this moment—Monday midday in my writing nook with Banjo finally asleep at my feet—is the first time I’ve been able to write.

With my walk-in wardrobe, it was tricky because the metal rails that held the shelves threatened to pull the entire system, on the opposite side, down as well. I had to take everything apart while holding the rails up. It wasn’t easy. It took me hours to organise the piles on my bed. And I had to wait for the handyman to come home and screw the rails in again. There’s no handyman to fix my brain. I have to methodically work through it. Tomorrow it’ll be a week since we picked up Banjo, a week since I wrote. I still feel overwhelmed. Banjo now knows how to ‘sit’ but we’ve got a long way to go.

My hope with having a dog in our lives again, is for happy hormones and a good distraction that pulls me away from my chair, and of course a little ‘writing buddy’. Right this minute, he’s not doing too badly, fast asleep at my feet. 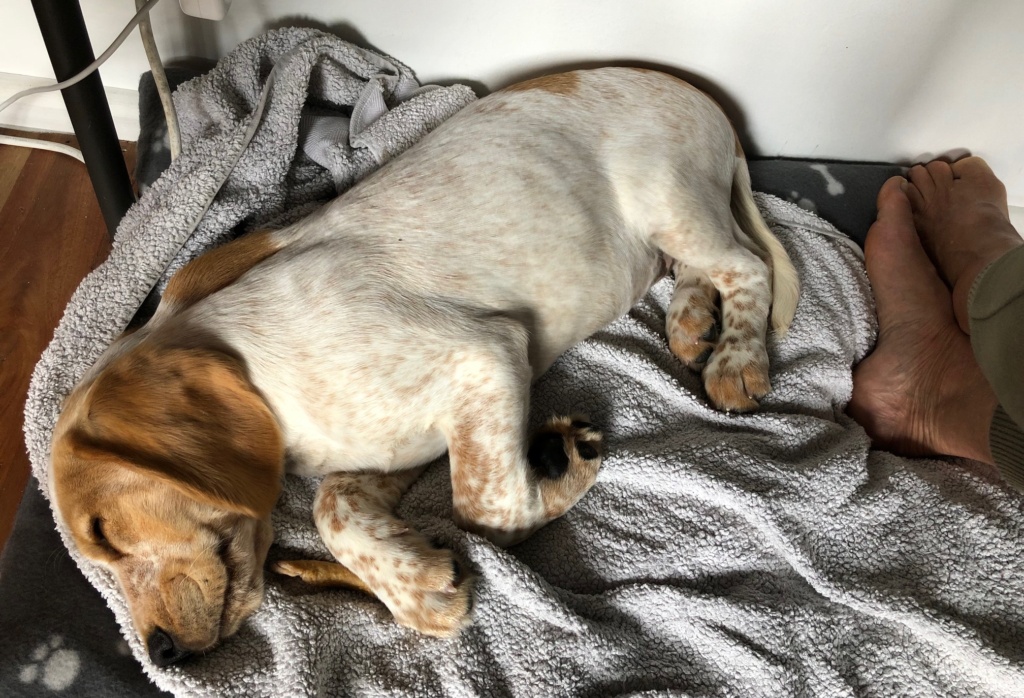