So Much For That 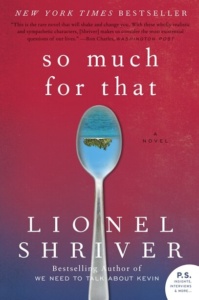 Shepherd Knacker has had a life long dream, to escape the rat-race and flee to the African Island Pemba. He sold his handyman business a few years ago for the precise reason to leave civilisation for good and has been pushing the issue with his wife, Glynis, ever since. Now Shepherd has quit his job—where he used to be the boss—and has news for his wife: with or without her and their teenage son, he’s leaving. Glynis has news of her own. She’s been diagnosed with cancer from asbestos exposure.
Shepherd has to crawl back to the boss and ask for his job back; so begins a year with dwindling funds. The medical expenses are elephantine but there’s also his son’s private school, his adult daughter, his bludging sister, and an ailing father.
As the supporting subplot cast there’s best mate Jackson and his wife Carol with problems of their own, and their two daughters, Flicka who suffers Familial a debilitating genetic disorder, and Heather who suffers a certain envy of her sister always being in focus. Jackson suffers too, in detrimental silence.
Lionel Shriver is superb at bringing the seemingly mundane to life. Her characters are flawed, likeable, and believable. Her prose is brilliant. Weaving everything from subplots to minor details into the theme, she’s sharp, funny, and ruthless in telling this tale of everything from tragedy to victory. I laughed often but it also brought me to tears because I cared about these people.
It was a little slow to begin with and the author’s prose demands me to pay attention. Towards the end, I couldn’t put the book down. Another successful Lionel Shriver book to inspire me.

So Much For That by Lionel Shriver