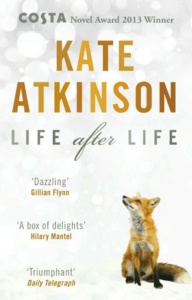 This book is part of my small, treasured collection of Kate Atkinson. I’ve been thinking about reading it again but when I found it as audio at our online library I decided to listen instead to Ursula’s attempts in getting her life right. (Read well by Fenella Woolgar)
A baby is born during a snowstorm in 1910 but dies after birth. Start again. A baby is born during a snowstorm but this time survives. Meet Ursula, third daughter of Sylvie and Hugh Todd and follow her many lives through the early century into second world war and eventually beyond. What if you were offered chance after chance after chance to start life a fresh, have another go, until you got it right, until you made all correct decisions to change the outcomes for yourself, your friends, your brother and the world. And if you did, would you? The story of Ursula is original, imaginative, and compelling. Atkinson is both brutal in the treatment of her protagonist and compassionate. Atkins knows how to draw you in, fill you with empathy and sympathy. So many wonderful characters (loads of them but all real, nothing cardboard about anyone). Younger brother Ted ends up with his own book’—A God in Ruins’ 2015—which Atkinson calls a companion piece equally gut wrenching. I’m not a fan of second world war settings or any war settings for that matter but it’s Kate’s eye for detail, the intimate, the very human aspect that does it for me. Some books I found I can read sort of half asleep, this is not one of them. I have to keep track on Ursula’s death and restarts. Atkinson put a lot of effort into writing ‘Life After Life’ I’m sure and to read it I felt I had to do the same and I was rewarded. ‘Life After Life’ won Costa Book Award in 2013

Life After Life by Kate Atkinson