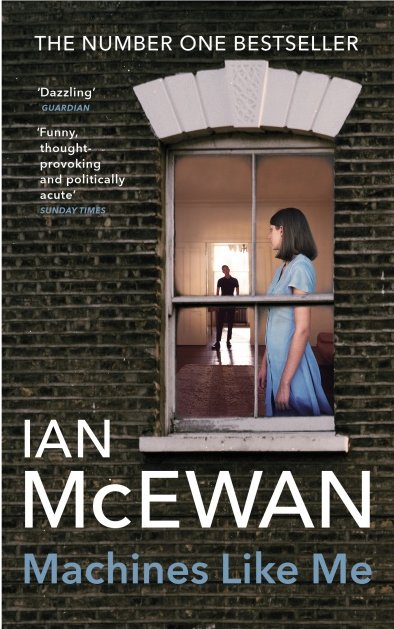 This is the first novel that I’ve read of Ian McEwan but it won’t be my last. Mr McEwan is a critically acclaimed author of 17 books. He’s a clever, clever writer, a skilful crafts man of the written word. I’m in awe.
This is an alternate history and science novel where Great Britain loses the Falklands war and the labour party wins the election against Margaret Thatcher—that’s the backdrop.
The story is told in first person, past tense, from Charlie’s POV. Charlie lives in a tiny London apartment, and is in love with Miranda who lives next door. Charlie who’s quite mad about technology has just unpacked Adam, the new groundbreaking synthetic (robot) human on the market. Adam is handsome, strong, and clever. And so begins a love triangle of sorts which gets further complicated by Miranda’s secret from the past and Adam’s layer upon layer of new experiences and personal growth if that’s what it can be called when you’re talking about a machine. All three characters will be impacted by each others decisions. The book explores different aspects of morality and philosophy and what is it that makes us truly human.
Apart from taking to McEwan’s writing voice straight away, this imaginative story has depth, humour and intelligence all through. I could easily have highlighted at least 80% of every page of this book. So much to think about. Such beautiful prose.