This is another assignment from first course at the Writer’s Studio. Our task was quite specific. We were to draw the reader outside after an initial description inside, and the story was to end with a coughing fit. 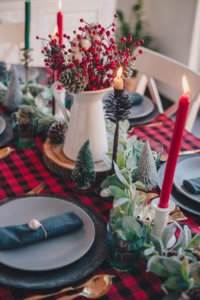 By the open hearth, dressed in garlands and golden baubles the tree glittered. Damp wood devoured by flames, crackled and spat, giving playful light to the logged walls and their double glazed windows. Moist, trapped between glass and glass, gleamed with reflection, obscuring the dark outside.

Don let his camera linger there, zoomed in and then switched off. Tchaikovskys’s ‘The Nutcracker’ kept playing from the portable speakers while the TV crew clapped and cheered.

Julia came down the wooden stairs dressed in deep green satin, shades changing over her body as she moved. Her hair, curled and loosely braided, revealed a delicate neck and antique pearls. She smiled at the faces staring up at her expectantly—her new colleagues and her new boss. Julia let her broad smile show them, there were no jittery nerves. She was in control.

Hostess and guests were to be seated for the next segment in ten minutes so they got going finding their allocated spots and getting touch-ups by the make up team. It was live but it was well rehearsed.

Outside it was snowing again. Fluffy crystals swirled and tumbled in the wind, instantly lost at touch down. Tall pines, branches heavy with snow stood silent under a black sky freckled with stars. The air was ice, biting and burning. A creaking branch or wisp of wind was all that was heard in the quite night. Parked cars exposed by the luminous moon were already covered under white blankets.

Two hours later it was clear that Yule with Julia, the Christmas Eve live with anecdotes and culinary advice—all shared seemingly impromptu—was rating high with viewers around the country. It was time to wrap up the night with a final speech. The camera was rolling again after the last commercial break. Everyone quietened as Julia tapped a delicate spoon on her port wine glass. She stood up, a little stiff, a little stuffed, from a long evening. With blushed cheeks, glazed eyes, and a tickle in her throat, she looked straight into the camera.

Julia swallowed. It didn’t help. If anything, it made the tickle worse. Her throat wanted to release itself of the suddenly infuriating aggravations. She swallowed again, and again. Her diaphragm tightened, wanting to push. Her boss watched with raised eyebrows as her face turned red. Her new colleagues sat there, all staring at her, wondering. Don kept filming. Couldn’t he tell, she needed a minute, and a glass of water. Bloody hell!

Julia, found her linen serviette. Without any further ado as Sweden watched, Julia Appleqvist the up-and-coming star—with one coquettish hand in the air as an apology, and the other over her mouth—let out a coughing fit like no other as she simultaneously, much to her own surprise and detriment in full force staccato, broke wind.