The Woman in the Window 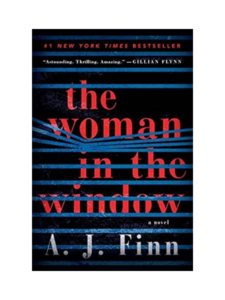 ‘The woman in the window’ by A. J. Finn was a book I’d heard of and I was lucky to find the hardcover publication on sale at my local bookshop. I’ll be keeping this book and go back in with a highlighter which I failed to use through my first read.
Anna Fox is a child psychologist who’s off work and has been stuck in her enormous old house in New York due to agoraphobia. She battles her debility and her separation from husband and daughter with medication,—a lot of—alcohol, and old Hitchcock movies. And she watches her neighbours through her windows. One evening she hears a scream and then becomes a witness to a crime. When no one believes her, she must uncover the truth on her own. But then again what if Anna got it all wrong.
I think this is a fantastic thriller with a well developed plot that twist and turn that way and this way. Anna is flawed, likeable, and believable. She has agency. And her ghost from the past is delivered in segments. Every character serves a purpose, every bit of dialogue, description, down to the mentioned conversation in the Hitchcock movies Anna watches. There are no plot holes. Yes, I could guess most of the twists but usually not too early and if the writer is too clever that’s not fun either. I like the voice of A. J. Finn, the writing style, the descriptions, the eye for detail, the internal dialogue of Anna all of it so a definite fiver.
I watched the movie the other night. Amy Adams did a brilliant job in the leading role. There were parts that translated poorly from words to visual and I personally would have liked to see Anna’s past, imbedded into the story in a different way. I’ve not found a website for A.J. Finn but I’ve learned that it’s a pseudonym for Dan Mallory.

The Woman in the Window by A.J. Finn