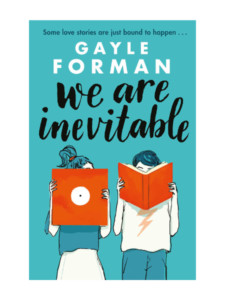 This was my first Gayle Forman novel, and I must go check out her other titles. I loved this book. Again it was audio, ready by Sunil Malhotra.

At the age of 18 Aaron Stein isn’t thrilled with his life. And why would he be? After the inevitable ‘asteroid’ hit his family, his older brother is gone, as is his mother, and now he’s stuck with his ditsy father Ira, in Cascade Mountains Washington State, with a failing bookshop, and pending financial ruin. His friends have gone to college and moved on with their lives, while Aaron and his dad are heading for extinction.

Matters take a turn when wheelchair bound Chad somehow talks Aaron into having a ramp built for shop access, and a couple of lumberjacks decide to help out. Meanwhile Aaron does a deal with the town’s business shark, behind his father’s back. In the midst of his mess, and despite the fact that Aaron doesn’t like music, he encounters against all odds—and fall head over heels—for Hannah, lead singer in a band.

This is a novel where theme, setting, main character and supporting cast, plot, and story come together just so. A great book for anyone who wants comedy and complications, believable and real people, heart and romance. The ending was surprising, inevitable, and for me fully satisfying. Gayle Forman nailed it.

We Are Inevitable – Gayle Forman